On May 26, 2016 The Flaming Lips performed their classic album The Soft Bulletin in its entirety with the Colorado Symphony at Red Rocks Amphitheater in Colorado. The Flaming Lips (Wayne Coyne, Steven Drozd, Michael Ivins, Derek Brown, Jake Ingalls, Matt Kirksey and Nicholas Ley) were accompanied by a 69-piece orchestra and 56-strong Chorus. Torrent Flaming Lips Soft Bulletin Drivers Geonaute Keymaze 300 Software Kenan And Kel Full Series Online Crown Heights Affair Dreaming A Dream Rar Glasswire Pro Gana Bala Songs Free Download In Tamil 2015 Dolphin Emulator Apk Bios Ubiquitous Synergy Seeker Uss Approved Torrent. May 17, 2019 The Soft Bulletin was probably not what they were expecting, but it ended up saving the band’s relationship with Warner anyhow. Making full use of their budget, the Lips and Fridmann concocted a. The Flaming Lips are an American rock band, formed in Norman, Oklahoma in 1983. Melodically, their sound contains lush, multi-layered, psychedelic rock arran. These recordings have been freely traded amongst the Flaming Lips community for years, in places such as The Flaming Lips Hub or Flaming Lips Messageboard, but we will not be offering any recordings that are commercially available. We encourage you to support the band by legitimately purchasing commercial releases.

The Flaming Lips have survived and evolved through an astonishing number of indie-rock life cycles. They were labelmates with Fear, Wipers, and the Dead Milkmen and were three albums deep by the time Nirvana released Bleach. They were contemporaneous with both 90210, on which they memorably guested, and The O.C., which fomented the Bush-era indie boom they rode to festival ubiquity. They ushered Miley Cyrus through the weirdest phase of her public identity crisis. On record they’ve been skuzzy noise-bombers, fuzz-pop cartoon characters, experimental stunt artists, digital folk-pop anthem-slingers, and tripped-out paranoiacs. They formed the year I was born, and I am now halfway through my thirties — old enough that today’s teens make me feel like an ancient relic and albums released when I was their age are turning 20. 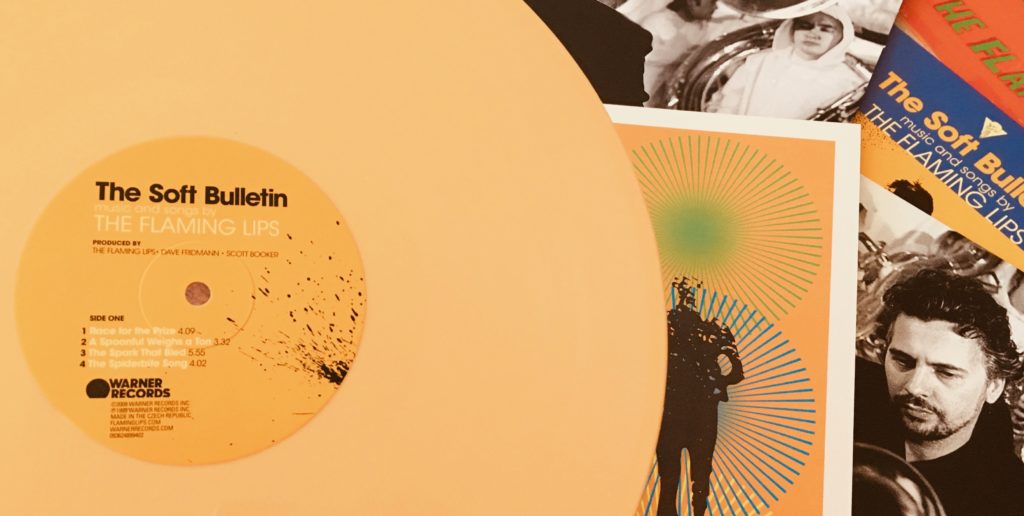 One of those albums is The Soft Bulletin, which completes its second decade today. (It was released on 5/17/99 in the UK before coming out in the US the following month.) Hailed as a masterpiece upon arrival, the album is still arguably the Lips’ finest creative output, though with a discography as vast and varied as theirs you’ll never have complete consensus on that. What cannot be disputed is that The Soft Bulletin is the most pivotal release in the band’s career, the one where they cemented their status as legends and established the archetype they’ve been tweaking ever since.

The version of the Flaming Lips we have today, the one that has long since calcified into a shtick? With Wayne Coyne in a suit playing ringleader for a fantastical circus, spewing blood or rolling atop his audience in a giant bubble while Steven Drozd leads the band through psychedelic symphonies? That began here in spectacular fashion, with a dozen tracks that rewired the Flaming Lips and, upon impact, rewired quite a few listeners’ brains too. Among them are some of the most successful psych-pop crossover stars of our time. It’s hard to imagine acts like Tame Impala and MGMT existing in their present form without this record’s influence. The Soft Bulletin is a world to be explored, and it has continued to beget new galaxies as fellow visionaries discover it.

It was also a culmination of sorts. Its brilliance might have caught people off guard, but it didn’t come out of nowhere. The band had been inching away from the revved-up psych-pop formulation that yielded surprise hit “She Don’t Use Jelly” ever since the commercial failure of 1995’s Clouds Taste Metallic (which may be the real best Flaming Lips album depending on your mood). After guitarist Ronald Jones departed, Coyne and drummer Steven Drozd cooked up a series of stunts called the Parking Lot Experiments, ambitious compositions comprising dozens of cassettes designed to be played simultaneously through car stereos in a parking garage. This led to 1997’s Zaireeka, an album released on four discs designed to be played all at once. You couldn’t listen to it unless you had four CD players and at least one friend on hand — or made very creative use of your own appendages — but if you did manage to hear Zaireeka, you got an inkling of the Lips who’d emerge on The Soft Bulletin two years later. It’s much easier and significantly more thrilling to simply press play on “Race For The Prize” and let it sweep you away. With a jarring thwack, Drozd’s drumbeat begins bashing away at the front of the mix, a disorienting production choice that contributes to the feeling of a demo transposed into holographic 3D. Instead of overdriven power chords, we’re treated to a swirl of synthesizers mimicking orchestral strings, sighing wordless harmonies, Michael Ivins’ steadfast bass, and an assortment of other pretty instrumental flourishes. Atop the ruckus is Coyne’s Neil Young mewl crying out about a pair of scientists racing to save mankind from some unspecified threat even if it costs them everything: “They’re just humans with wives and children!” (Weird side note: Between this, Keep It Like A Secret, and Summerteeth, Young’s current label home Warner Brothers was absolutely running indie-adjacent, Young-inspired rock in 1999.)

“Race For The Prize” is both epic and completely ridiculous, a balance The Soft Bulletin strikes throughout its hourlong runtime. Working with sound-bombing producer Dave Fridmann at his Tarbox Road Studios in Cassadaga, the Lips funneled a vast array of instruments and wanton studio trickery into an aesthetic that made Coyne’s avant-twee pop songs feel truly otherworldly. In the wake of the Parking Lot Experiments, Warner Brothers had given the band $200,000 and left them alone to create two new albums with the understanding that they’d quickly follow the gimmicky Zaireeka with a more normal release. The Soft Bulletin was probably not what they were expecting, but it ended up saving the band’s relationship with Warner anyhow. Making full use of their budget, the Lips and Fridmann concocted a lush yet hard-hitting update on Brian Wilson’s pocket symphonies, a style that exists at the intersection of chamber-pop and noise-pop and plays out with the pomp and circumstance of a Broadway production.

The resulting voyage is as captivating now as it was back then. On “A Spoonful Weighs A Ton,” peaceful symphonic reverie is disrupted by bass blasts deep enough to test the limits of your subwoofer. On “Feeling Yourself Disintegrate,” wistful layers pile up atop a looped human whisper beatboxing like the world’s gentlest snare drum. “The Gash” faces down depression with the Disney version of a military march, while “Buggin'” more closely resembles a swarm of dancing fireflies than anything Owl City ever came up with. Occasionally they let tender beauty remain uncluttered, as on instrumental epilogue “Sleeping On The Roof,” a song so charged with emotion that it brings me to the verge of tears for reasons I don’t fully understand. Other tracks play out in movements, like “The Spark That Bled,” where gaping swoons give way to a constantly shifting rhythmic landscape and gigantic fist-pump climaxes, and “Suddenly Everything Has Changed,” a series of shifting dioramas connected by eerie shapeless passages.

Coyne’s lyrics matched the music’s larger-than-life scope. He’d always had a thing for outlandish narratives, and now he had a proper canvas to truly geek out. Thus, The Soft Bulletin is filled with stories of dreamers who dared to lift up the sun in the name of love(?) and revolutionaries who stood up and said “Yeah!” at the risk of being struck down by “the softest bullet ever shot.” Yet as the album rolls on, he makes plain the connection between these hero journeys and the daily struggles of human life. The Lips endured some big ones while creating this music. Coyne’s father died of cancer. Ivins suffered a traumatic car accident. Drozd’s heroin abuse — one factor that caused Jones to leave the band — got so bad that doctors worried his hand might have to be amputated, a situation addressed directly on the silly-sounding “The Spiderbite Song,” named for an injection-related abscess Drozd originally blamed on a poisonous spider.

The further you get into the tracklist, the more Coyne lays bare the pain at the heart of these epic sagas. “Suddenly Everything Has Changed” chronicles everyday situations marred by the onset of depression. “Feeling Yourself Disintegrate” is about finding the will to live even as the reality of certain death sets in. On “The Gash” he poses a question that looms larger as modern culture grows ever more comfortably numb: “Will the fight for our sanity be the fight of our lives?” And on “Waiting For Superman” — the simplest and most devastating track here, on which Coyne reckons with watching his father slowly wither away — he admits some burdens are too heavy for even a superhero to lift. In that context, it’s easy to hear “Race For The Prize” as a metaphor for what Coyne and his cohort were attempting to accomplish at Tarbox. Again and again he urges his listeners to hold on, buckle down, keep going. “What choice do we have?” he recently told the NME. “Do we live half a life because we don’t want to get hurt so much? Do we love half a love because we might lose it?”

The Lips would return to these themes on Yoshimi Battles The Pink Robots three years later, coming off more like a caricature but scaling far greater commercial heights. In the years since, it’s been easy to write them off as overgrown children trading in gimmicks that prioritize artifice over substance, leaving a trail of useless gummy skulls in their wake. At times they have lived up to that reputation — increasingly so as their magical mystery tour has rolled on despite their lysergic well of ideas seemingly drying up. Maybe even The Soft Bulletin’s idealistic calls to perseverance strike you as naive. Fair enough. Laugh at the Lips if you must, but a good-faith survey of their accomplishments reveals they’re no joke. The fearless freaks have built one of the most impressive discographies in rock history, enacted dazzling spectacles around the world, and continually dared to bring their wildest ideas to fruition. They’ve had home runs and strikeouts, but man, they have swung. And with The Soft Bulletin, their ambitions manifested one of the greatest triumphs in psych-pop history.

more from The Anniversary

On Soft Bulletin [Live at Red Rocks], the Flaming Lips bring together the open-air immediacy of an outdoor rock concert and the majesty of an orchestra -- two things rarely heard together on the average live album. Capturing the band's performance of their landmark 1999 album at the famed Morrison, Colorado amphitheater in 2016, the album never sounds too mannered or too raw. On songs such as 'A Spoonful Weighs a Ton,' heavy bass and guitar, pedal steel, strings and Wayne Coyne's fragile vocals all hold their own and blend together organically; considering that this is the first time the Flaming Lips recorded with a full orchestra, it's an even more impressive feat. The band's collaboration with the Colorado Symphony, a 57-person chorus, and conductor André de Ridder often reaches dazzling heights, particularly on the dynamic psych-rock of 'Gash' and 'The Spiderbite Song,' which translates every bit of wonder in the studio version to the Red Rocks stage. The crowd's rapturous reception of Soft Bulletin [Live at Red Rocks] acts like another instrument in the album's mix, with the swells of applause for songs ranging from the iconic 'Waitin' for a Superman' and 'Race for the Prize' to the instrumental 'The Observer' providing euphoric crescendos between each performance. An engaging and special live album that remains true to the original's maximalist, life-affirming glory, Soft Bulletin [Live at Red Rocks] is another fine example of the care and creativity the Flaming Lips put into all of their music.